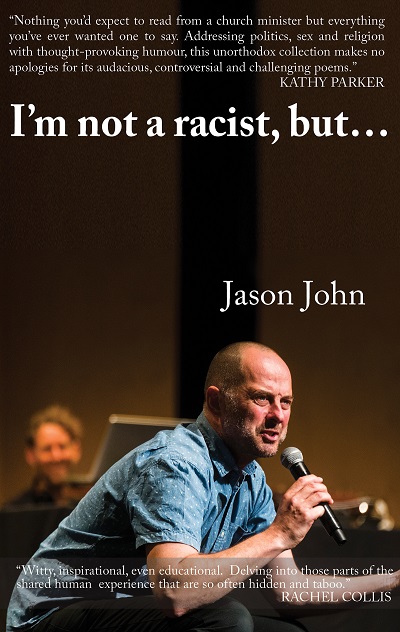 read a sample and watch some performed

In Australia, you can buy the paperback direct from me through PayPal and save a bit of money, and I make about $5 instead of $0.98.  You will probably get it faster from me than online stores too.

(scroll back down after you click to see the cart)

Anyone can buy the ebook direct and I’ll send you a pdf, mobi (for kindle) and epub.


(scroll back down after you click to see the cart)

(scroll back down after you click to see the cart)

Or buy from these online retailers, because their rich owners aren’t rich enough 😉

amazon.com.au
booktopia ebook
booktopia PRINT book
amazon.com
Do me a favour? Review it on goodreads

The poems in this book contain explicit language and mature themes, often explored in comical, even farcical ways.  Specifically, words like f*** and c***, are used, though usually in their technical sense, not as expletives.  Please don’t read the book if that will offend or upset you.

“I’m Not A Racist But” is nothing you’d expect to read from a church minister but everything you’ve ever wanted one to say. Addressing politics, sex and religion with thought-provoking humour, this unorthodox collection makes no apologies for its audacious, controversial and challenging poems. Be prepared for your religious stereotypes to be smashed wide open in the most refreshing of ways. Jason is, without a doubt, the Australian Pete Holmes.” – Kathy Parker, writer, poet, author.

An irreverent (or is that Reverend) take on a whole swag of sacred cows. Great toilet reading, or in any other location where there’s space for a belly laugh. A clever and witty use of comedy to raise some serious issues. What a little gem.”– Tim Cadman, author.

“In these weird times, we need thinkers and communicators like Jason, more than ever.” – Jen.

“The NSW Slam Poetry final was good. But Jason was really good.” – Emma.

“Witty, inspirational, even educational. Jason delves into those parts of the shared human experience that are so often hidden and taboo… He goes straight to the heart of it, bursting it open, and dissecting it one bloody piece at a time. He’s a truth teller, a stater of the bleeding obvious… and perhaps one of the few of us who has the gumption to do it!” – Rachel Collis, songwriter, performer.

“The first time I heard Jason speak he spoke truth, truth that I might not want to hear. I also heard weirdness and rabbit holes and language that I could not let my mother hear. These poems remind me of those times – of curiosity, revelation, compassion and downright surprise – enjoy!” – Michelle.

“The epitome of rhyme and reason, with a generous side of humour… capable of making you feel a childish giddiness – even with tough adult subjects you wouldn’t typically think you could… the balance between shamelessness and tenderness takes a little while to believe. Yet the laugh or catharsis (or both) that it provides is instant… the collection feels holistic and demonstrates textual integrity as each poem flows into the next and has a conversation with the other about climate change, Christianity, racism, sex and more. I’m not a Racist is a load of shit, but as this book will soon teach you – what a relief that is!” – Defne, WestSide Poetry Slam.

“Igniting flashes of wakefulness through a lively, poetic commentary on the subtleties of life… courageously open, deliciously challenging and crafted from a vast space of deep compassion.” –  Lisa Brown, psychologist & environmental activist.

“… an invitation to eavesdrop on the creative process and whirring mind of a slam poet preacher who cares deeply about testing the faith of his audience without giving a fuck about their sensibilities.” Damien Becker, performance poet

“… reveals the slam poet’s arsenal (with the emphasis on arse).  Sarah Temporal, performance poet and educator

“… poking at every taboo with a curious balance of frivolity and utmost respect. I don’t quite know how he does it, but the way he wears a privileged context with an almost crude boldness while still managing to be culturally sensitive is astounding. He is a provocative voice in the poetic and religious community, and a flavour that I’m very happy exists.”  Hunter Wynn, performance poet

Jason turned parts of his PhD on Biocentric Christianity into a short book, accompanied by one documenting the history of the Adelaide Ecofaith Community.  A third uncovers the horror within the readings set for churches around Easter time, which consistently seek to exclude people, and Jesus’ radically inclusive response.  Just realeased is Christian Sex Today: Lessons from Moses, Paul, Jesus and Darwin.  Details below.

If you were edged out of church, or drifted away, because your sexual practice didn’t fit the narrow prescriptiveness of your congregation, perhaps this will provide a way back, or at least nurture your faith and discipleship as part of the church diaspora.

“Sex, evolution, and the Bible… For some Christians those three words should never be together in the same religious sentence. But Jason John (thank goodness) has put them there – and all with raw and open honesty. I await the prayers and bonfires!”

Out now through Coventry Press 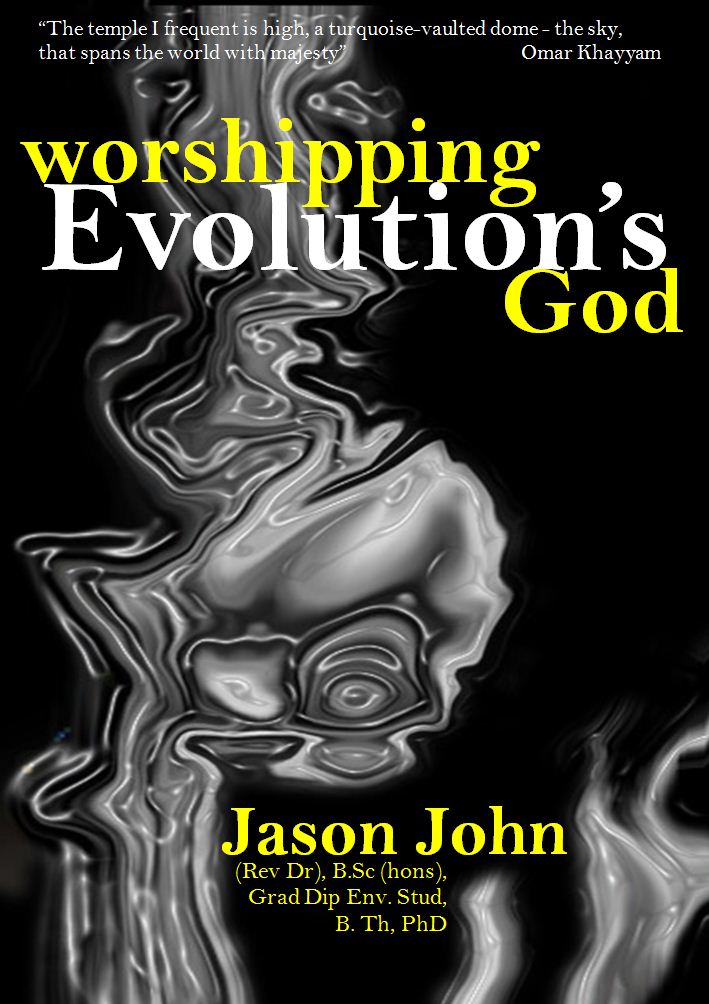 Christians worshipping God as part of life, not the centre of it. 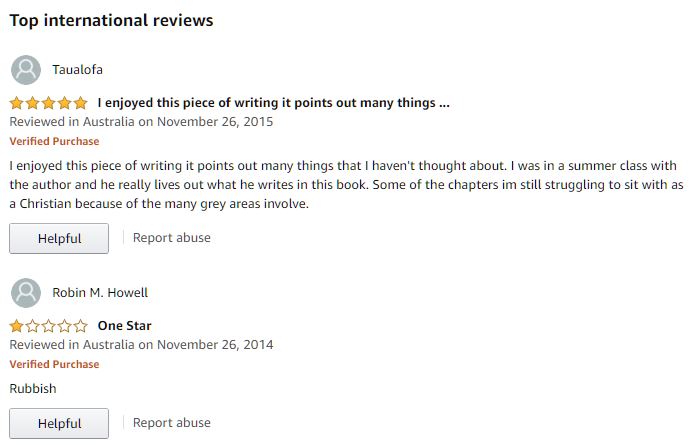 What does it mean for humans to accept that we are not the centre of life, but continue to worship God in a tradition which has assumed that we are?

How do we worship the God of this evolving life? Why is it so hard to get babies out, and why are there so many weeds?

Why do we sin? How does our new understanding of our brain and its evolution help us answer this, and what do we do about it?

Are we inherently selfish and violent? What do we make of the whole story of Easter, seen through the eyes of a God who loves other animals as much as us, and never asked for ritual sacrifices of the innocent? What did Jesus make of Easter?

Why are we here? Is there an “after here?”
What do post-Darwinian Christians make of sex? 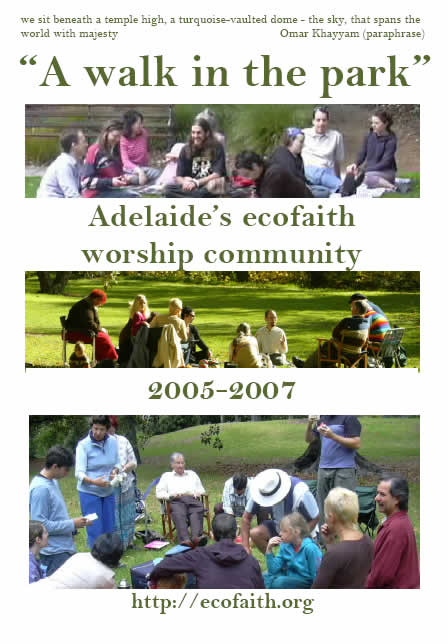 A Walk in the Park

This is a potted history of the first couple of years of the Adelaide ecofaith community, which I wrote in my final months there.

As of 2013 the community is still meeting.

This e-book doesn't handle the original image layout brilliantly, so if you buy it let me know and I'll also send you a full colour pdf. 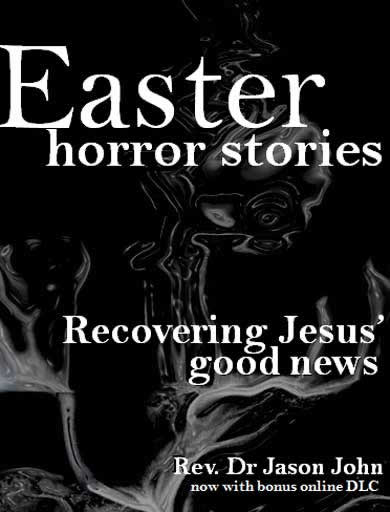 In the salvation stories the church reads in the lead up to Easter, someone always gets left out.  Someone always has to suffer, because people cannot just be forgiven.  Jesus disagrees.

Salvation for Noah and his sons
Jesus gets started
Salvation for “the Jews.”
Bible breaking foreskin keepers
Salvation for obedient Jews
shut up about the Messiah!
Mustn’t grumble
the suffering, victorious son of man
Jeremiah: a new thing.
Jesus: a new thing.
The temple is a joke
You sort it out with God.
Bad things happen to good people. Even Jesus
Friday. There is nothing good about it
Mark's Easter: The world’s first cliffhanger?